Another New Hampshire Campground Closes Due to Increased Bear Activity

Another campground in New Hampshire’s White Mountains is closing due to increased bear activity.

“Due to an increase in bear activity, and for public safety, the USDA Forest Service has issued a closure order for Hancock Campground located on the Kancamagus Highway in Lincoln, NH,” the Forest Service said in a statement.

According to a report, the campground will be closed starting today,  August 11, and will remain closed until August 25.

Recently, the Forest Service warned of high bear activity at Hancock and Big Rock campgrounds, saying at least one bear received a food reward and then tore a tent apart.

Last March, a bear showing no fear of humans prompted the closure of the Fourth Iron Campground for a couple of weeks.

Wildlife officials say the bears are extraordinarily active in the region this summer. One reason could be the absence of rain, forcing bears to move around because their traditional food sources aren’t as abundant.

Campers are advised to store food and trash properly or risk getting a fine.

As per the U.S. Forest Service, campers and hikers can avoid conflicts with bears by maintaining a clean campsite and storing food, garbage, and aromatic items, like toothpaste and other toiletries, out of reach of bears and not in tents or unsecured at campsites.

If car camping, campers are advised to keep all food and coolers in a building or vehicle with the doors locked, and windows rolled up. 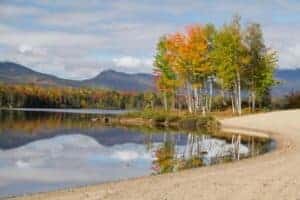 Send this to a friend
Hi, you might find this article from Modern Campground interesting: Another New Hampshire Campground Closes Due to Increased Bear Activity! This is the link: https://moderncampground.com/usa/new-hampshire/another-new-hampshire-campground-closes-due-to-increased-bear-activity/