Karnataka Aims To Entice Coastal And Caravan Tourists To India

The South Indian state of Karnataka, rich in heritage architecture, wildlife, green-clad mountains, and fascinating culture, is planning to extend tourist reach by developing its coastline sandwiched between Goa and Kerala.

The state is also creating campsites for caravans to help tourists drive to destinations in homely comfort, according to a press release.

“Infrastructure for connectivity to our three coastal districts is already in place. Have had discussions with Chief Minister Basavaraj Bommai, for relaxing of Coastal Regulation Rules (CRZ) to facilitate tourism in Karnataka’s untapped coastline that lies between Goa and Kerala, which are already popular for their beaches,” said Karnataka State Tourism Development Corporation (KSTDC) Managing Director G Jagdeesha.

Tourists’ new interest in nature-based, sustainable tourist options was evident through the availability of relevant products at the mart. Green-covered Wayanad district of Kerala had 30 participants in terms of accommodation, attractions, and adventure.

Abhilash BC, head of sales at the Tamara Kodai, said that their nature-based resort did well even during the pandemic and continues to be so, thanks to tourists’ orientation towards secluded properties. Vaibhav Kamat of Kamat Ecotours and Jungle Lodges reiterated that his tours are gaining more popularity since the pandemic.

“Apart from visits to popular spots, we take guests to tribal homes, showcase traditional cooking, and involve destitute women to earn through tourism. Our clients enjoy and feel fulfilled at the end of their tours,” Sharma said.

Gujarat, Rajasthan, and Uttar Pradesh were partner states at IITM 2022 at Bengaluru.

“We are already popular for religious sites of Varanasi, Prayagraj, and Sarnath. The mega temple complex at Ayodhya will be ready in three years’ time. Our focus now is on projecting our natural sites like Dudhwa national park, waterfalls, Chincholi, and bird-watching tours. We’re also providing good incentives to private investors in tourism and upping our digital marketing to reach to more target groups,” Uttar Pradesh Regional Tourism Officer Aparajita Singh said.

Ayodhya is the birthplace of the Indian epic hero Lord Ram of Ramayana. The state is scheduled to introduce 51day long luxury-river cruising tours in December.

The cruise aboard Antara Cruises’ new 18-suite, art-deco boutique ship will start at the sacred river Ganga from Varanasi, sail through 27 small rivers across five states and Bangladesh, and end at Dibrugarh in Assam. There are hop-on and hop-off options for those choosing shorter trips on this route.

Rajasthan, the hot tourist destination of India, has become the first state in India to give industry status to Tourism, granted on 28 May this year. With that, power tariffs and other taxes levied on tourism operators have been brought on par with other industries against higher commercial rates.

The state has also allotted INR 10,000($126 mn) to better its infrastructure and introduced a Film Tourism Policy to promote its locations for filming.

Gujarat’s ‘Statue of Unity has already become a popular tourist destination in the state in just four years. The world’s tallest (182 meters) statue of Sardar Vallabhbhai Patel, the great uniter of 562 Indian princely states to form a single Union of India, is built on the banks of River Narmada close to the city of Vadodara.

The mega cactus garden tour, river rafting, and many other attractions are incorporated into the tourist package here.

A unique, new product at the IITM Mart was TravelCloth. The company promises to pick up and deliver clothes and tourist accessories to the client’s destination to coincide with their arrival at the destination to avoid the hassle of carrying heavy baggage along.

The baggage is even covered by insurance.  The service currently available across India will eventually expand to international destinations.

“India has emerged as a productive and interesting country in the post-pandemic era. International destinations are offering attractive packages to Indian tourists,” said Sanjay Hakhu, director of Sphere TravelMedia.

Air India participated at the travel mart for the first time since its acquisition by Tata Sons earlier this year. The airline on the great recovery path is adding 24 new domestic flights from 20 August by servicing more available aircraft from its fleet of 70.

“The state government is identifying plots and readying Campsites for Caravan parking at strategic tourist locations. We shall open up private sector investments in the segment, once we have basic facilities for this new segment in place,” Jagdeesha said.

Government-owned KSTDC is coming up with 3-star hotels at tourist places to facilitate better accommodation options. It’s also erecting tents to offer a choice of accommodation. 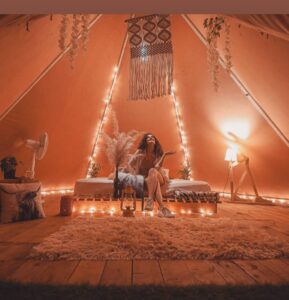 Send this to a friend
Hi, you might find this article from Modern Campground interesting: Karnataka Aims To Entice Coastal And Caravan Tourists To India! This is the link: https://moderncampground.com/asia/india/karnataka-aims-to-entice-coastal-and-caravan-tourists-to-india/